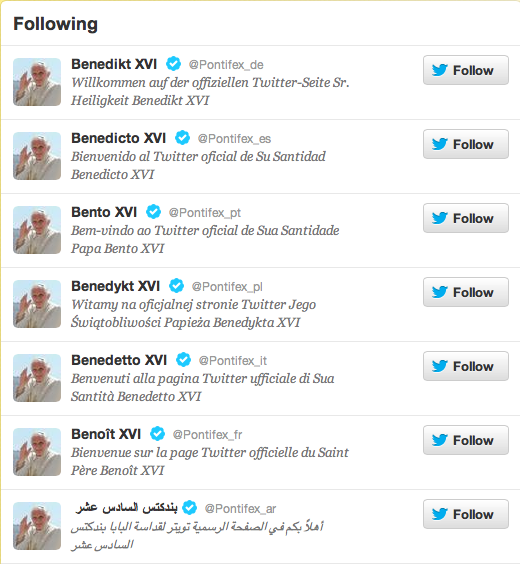 Pope Benedict XVI is now on Twitter (@Pontifex) although he doesn’t start tweeting until later this week.

I confess to having a feeling that this will not end as well as he (and his advisors) may think. However, I welcome his entry into the 21st Century…if only on twitter.

Popping by his profile today, I couldn’t help but notice that the list of people he’s following so far is somewhat…narrow. I guess if he only follows himself, it may in part explain why the Catholic Church is in such a spin during his ‘leadership’?

Anyway, I shall sit tight and await what unfolds as the Holy Tweets begin.

Just a regular married father of three type of guy. Writer of Haiku, founder of www.DementiaJourneys.com and other bits and other bobs.
View all posts by jrbsays →
This entry was posted in As I See It, Random Musing, Religion, Uncategorized and tagged Pope Benedict XVI, The Catholic Church, The Pope, Twitter. Bookmark the permalink.

4 Responses to Who Pope Benedict XVI Follows on Twitter